In light of VRChat's actions, I will no longer be supporting this prefab. No technical support or updated for this will be provided.

This prefab was created by Nisha Wolfe, and is available for use in any VRChat world.

This prefab is completely free, though if you want to support me, you can throw a few bucks to me at my Ko-fi page.

If you do end up using this prefab, please keep the 'About' text unchanged.

This software falls under the CC BY-SA License, please review LICENSE.txt included in the package for details.


Wolfe Video Player 3.0.x has only been tested with the Unity 2019 build of VRChat.


Example World
If you would like to try out the video player before downloading it youself, you can check out the example world.

The example world is hosted on VRChat, though all of the assets can be downloaded below as well.
Minimum Requirements
The following are the minimum requirements this prefab was tested with
Please note that you should always use the most recent version of the VRChat SDK & Udon Sharp when possible.

1. Create a new Unity project
2. Install the
requirements
.
3. Setup the VRC Scene Descriptor and other VRChat world requirements.
4. Import the Custom Package "WolfeVideoPlayerUdon.3.0.2.unitypackage" (3.0.2 being the most recent version)
5. Drag the "WolfeVideoPlayerPrefab" prefab into the world.
6. Within the Scene Hirearchy, select the "VideoController" and set the Video URL to the default video for your world.

1. Backup your Unity Project (This is EXTREMELY important)
2. Ensure the
requirements are installed
properly
3. Import the Custom Package "WolfeVideoPlayerUdon.3.0.2.unitypackage" (3.0.2 being the most recent version)
4. Drag the "WolfeVideoPlayerPrefab" prefab into the world.
5. Within the Scene Hirearchy, select the "VideoController" and set the Video URL to the default video for your world.

The Udon Video Player controls can be seperated into two categories, local and synced controls.
The locks next to the sliders will lock the sliders, preventing them from being accidently changed.

Pause/Play button - This button will pause or play the video for everyone in the world.

Timestamp Slider - This slider will allow you to set the current time of the video for everyone in the world.

These controls will only affect the local user modifying them.

Volume - Adjusts the volume for the video locally.

Sync to Owner - Forces the local video to reload, and sync to the object owner.

Become Owner - Makes the player into the object owner, allowing them to modify the Synced Controls.

Load - Loads the current URL in the URL Field, also makes the player into the object owner.

Lock Controls - Sets the world master to the object owner, and locks the "Become Owner" and "LOAD" buttons

Video Errors: - Displays any errors that occured while loading the video. 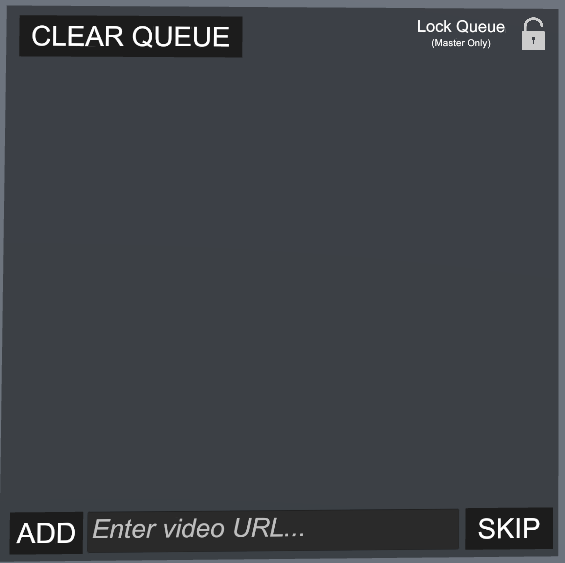 The Video Queue is not required for the Video Player to function.
It allows up to 30 videos to be queued up by any player.
Once the currently playing video completes, the next video in the queue will automatically play.

Clear Queue - Deletes every item in the current queue.

Lock Queue - Locks the Video Queue so no one other than the World Master can add, remove, or skip items in the queue.

Add - Adds the currently entered URL into the queue at the end.

Skip - Skips to the next item in the queue. This will stop playing the current video and play Queue item 1. 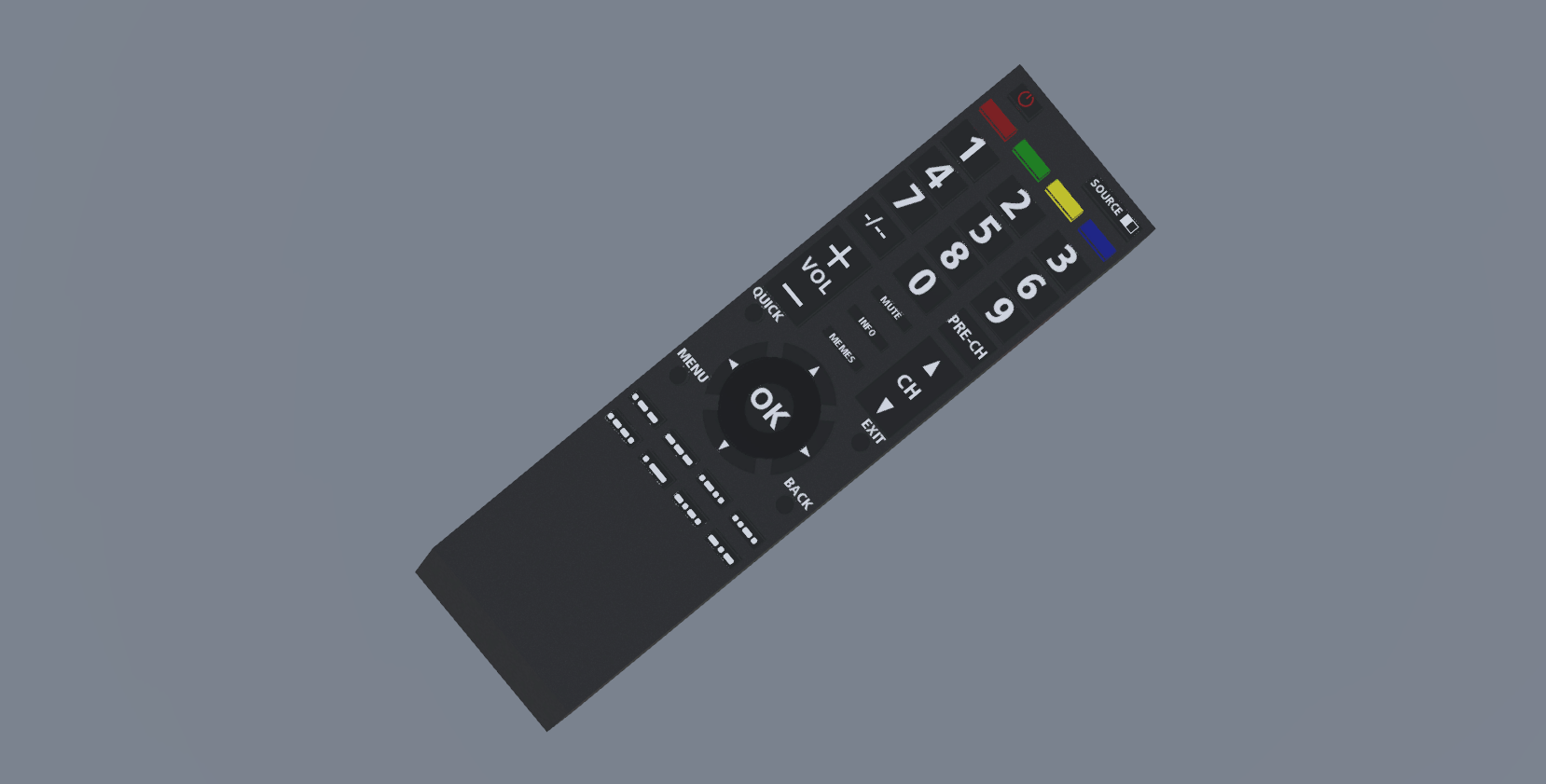 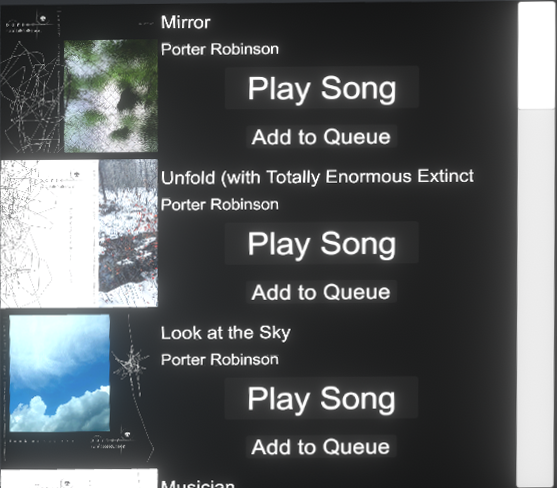 The Karaoke Addon allows you to define a set of videos that players can select from when using the Video Player.

1. Import the WolfeKaraoke Prefab
2. In the "WolfeKaraoke" --> "Prefabs" folder, drag the "Wolfe Karaoke" prefab asset into the scene.
3. Set the "Wolfe Player Controller" within the new object

1. In the Hirearchy, navigate to "Wolfe Karaoke" --> "Karaoke Canvas" --> "Viewport" --> "Scroll Parent (Add Songs under here)"
2. Drag a new "Karaoke Song" prefab as a child of the Scroll Parent.
3. Set the song's URL and other details you want shown.

Does the video Player work with CyanEmu?

no, as of 8/5/2021 cyanemu does not fully support VRChat Video Players. the best way to test confirm that the player works is by using the "build & run" button on the vrchat control panel.

I cannot load videos other than Youtube in the player

Custom URLs require the "Allow Untrusted URLs" option within the VRChat Settings menu. Please read up on the VRChat Documentation for this and ensure you understand what enabling this will do.

I cannot hear any audio with the Video Player

I'm getting errors when importing the video Player

The initial import may throw Udon errors, if you are able to "Build & Test" it should be running fine.
You can also save and quit the Unity Project, and see if it throws errors again when you load the project.
If you are still concerend about the errors, feel free to contact me (My info is at the top of this page).

Does the video player support RTMP?

No. Unfortunately, AVPro Player does not support RTMP, so there is no way to support this.
Note: this may be outdated, it has not been tested in a while.

As of 2.0.0, It is. However keep in mind that Oculus Quest does not currently support Youtube Videos, as they require youtubedl which is not bundled with the Quest version of VRChat.
You can, however, play directly .mp4 videos with the player, and it will show up for Oculus Quest users.
Just ensure you are using a Quest Compatable Material for the screen (The included Example_Screen_Quest will work on Quest).

Can I use multiple Wolfe Video Players in the same world?

Yes, you will need to use seperate materials for each video player, but they will work completely independantly from eachother.

- Modified all Udon Sync variables to use 'Manual' sync mode.

- Fixed issue with Livestreams (Twitch) not always being automatically detected.

- Fixed issue with long youtube videos being recognized as Livestreams.

- Fixed issue where not all youtube url timestamps would be recognized.

- Fixed Player Crash when adding letters after a youtube timestamp.

- Fixed 'About' text being incorrect

- Added toggle for the Realtime Video lighting in the Example World, as it caused too much lag.

- Added a temporary workaround for scrubbing, due to a VRChat bug

- Fixed false-positive errors showing up int he Console when publishing the world.

- Entire codebase was rewritten from scratch.

- Removed all instances of Update() within the code.

- Added a string that shows the currently playing video URL.

- Fixed Mute button on the mini-player not working

- Fixed URL Input fields Navigation being set to "Automatic", now set to None